For end-of-life doulas, accompanying the dying is anything but morbid.

Amy Levine has sat with many dying individuals in her capacity as a hospice social worker. She’s often felt the same, uncanny feeling as the moment of death approaches.

“All I can tell you is that from where I have sat there has been a calmness and a sense that I want to be nowhere else but by that person’s side,” Levine said in an interview with HuffPost.

Levine is part of a growing movement of nurses, social workers and volunteers who are pushing for greater compassion and companionship for people who are dying. Borrowing language from the birthing world, they’re called death doulas, end-of-life doulas, death midwives and palliative care doulas.

“Doula” derives from the Greek word for a female servant, but has been re-appropriated in recent decades by trained individuals of all genders who offer support and comfort to people during pregnancy and, now, to those who are dying.
“There are so many people who are facing the end stage of life alone,” Levine said. “In my experience working with people at that stage, the real stress is often that no one wants to talk to them about it. That’s very isolating.”
Levine is the executive director of The Doula Program to Accompany and Comfort, a New York-based nonprofit that trains volunteers and matches them to work with a dying person in the area. 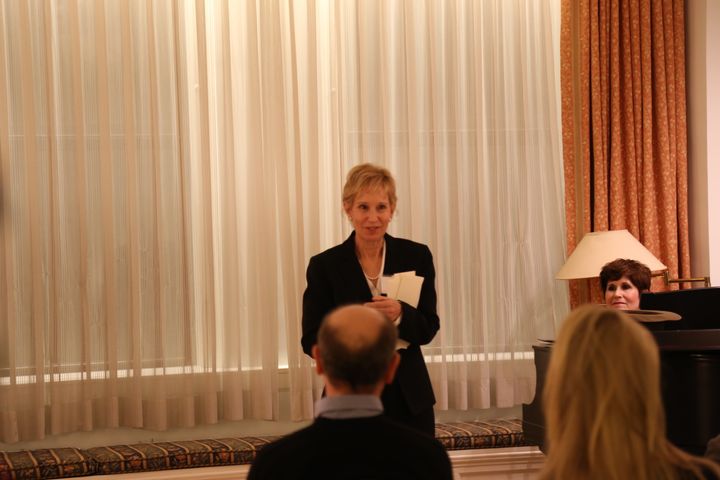 Unlike palliative care doctors and nurses, the volunteers’ role isn’t medical ― they’re there to offer support, to listen, and to develop a relationship with that person that transcends his or her illness. The relationships can last days, weeks, even yearsdepending on the dying person’s prognosis.

The Doula Program has roughly 60 active volunteers, Levine said, working with patients around the city who are facing a life-threatening illness. This can be people of any age who have been given a terminal prognosis and who are facing the end of life alone, Levine said.

For the purposes of their work, Doula Program volunteers aren’t particularly invested in being present at the actual moment of death. Levine stresses that their aim is to be present during the final stage of a person’s life and to get to know them on a deeper level than just their illness.

In an article recounting her volunteer experience with the program, writer Mara Altman described playing cards and exchanging playful insults with a patient named Jethro, who was living in a facility for people diagnosed with HIV/AIDS. Altman worked with Jethro for three and a half years, she said, seeing him more frequently than she saw many of her friends.

He was there for landmark moments in my life. He knew all about my wedding preparation and the frustration I was feeling in my career. When I came back from my honeymoon, he said, “Are you expecting or did you just put on?” By that point, his weight comments were actually funny. He was like an older brother, prodding at my weakness.

Around 200 to 300 people apply every year to join the Doula Program as volunteers, Levine said. Only about a dozen are admitted every application cycle.

It may seen curious that so many people would clamor to sign up to be a companion for someone who is dying. But for those who do this work, it’s anything but morbid.

“People always ask how we can do this work. They think it’s depressing,” said Janie Rakow, president of a nonprofit called the International End of Life Doula Association. “But when you do this work it is the opposite of depressing. It’s profound work.”

Dying in the 21st century is a far-cry from what death was like more or less for centuries of human civilization. Before the birth of Western medicine, individuals mostly died at home, surrounded by loved ones.

Most Americans today will die in a hospital, though the majority would prefer to die at home. There’s been a modest rise in recent years in the number of Americans who are both able to and choose to die at home.

The emergence of the death doula movement has coincided with this larger trend of people reimagining what death can look like for themselves and their families.

The emergence of the death doula movement has coincided with this larger trend of people reimagining what death can look like for themselves and their families.

You see awakenings, forgiveness; you see new bonds made and old wounds healed, which I believe send the dying on their final transition peacefully and bring new opportunities for the people who remain.”

INELDA is one of several organizations around the country that train and certify people to become professional death companions. There isn’t a national or international body that oversees certification requirements and scope of practice for death doulas like there is for most medical professions and even in some cases for birth doulas.

“Anybody who has a calling and an open heart can do this work,” Rakow told HuffPost. And an increasing number of trainings like the ones INELDA conducts are available around the country and internationally for those interested.

INELDA trains hospitals and hospice centers to set up their own end-of-life doula programs, as well as individuals who want to become end-of-life doulas.
In just a few years of operation, the organization has witnessed a boom in public interest for death doula training. Participants at INELDA’s first two trainings in 2015 were largely interested in learning the skills for personal reasons, said the group’s vice president, Jeri Glatter. Within months, enrollment swelled and at least a third of participants were planning on becoming private practitioners, Glatter said.
“It’s evidence of how much of an emerging field this is,” she told HuffPost. “Literally within months the door had swung open and this movement had begun.”
Where The Doula Program focuses on the relationship between the volunteer and the dying patient, INELDA’s doulas are also trained to help the individual’s family plan for and process their death.
“We really get to know this person so we can have a vigil plan and understand how they want their last days, weeks or months to unfold,” Rakow said.
That includes helping the family put together legacy items, like memory books, video tapes, audio recordings, and collages ― things they will have to pass down after the person’s death.
As long as the person doesn’t die suddenly, the doula comes and sits vigil by their bed for their final moments. They also attend to family member’s concerns and help them to understand the dying process.
“This is where a lot of anxiety comes in because we’re not used to seeing death,” Rakow said.
One time when she was working with a patient at the hospital, Rakow recounted, she overheard a family in the next room struggling with grief over their mother’s impending death. Rakow decided to approach them, explained her role as an end-of-life doula and asked if they wanted some support.
“I spent 45 minutes talking to them, listening and telling them what was happening,” she said. She explained the signs and symptoms of death ― the change in breathing, the mottling of the dying person’s skin ― which had frightened the family. “By the end they were relaxed and calm. They said ‘This makes sense,’” Rakow said.
For Deanna Cochran, a hospice nurse and the founder of Quality of Life Care, which trains and certifies death doulas, her goal isn’t to create another health care profession but to empower individuals everywhere to emotionally support their loved ones as they die.
“I want to get the message out that you can do this too. You can learn to take care of your own dying and dead,” Cochran said.
Like birth doulas do, Cochran encourages death doulas to be advocates for their clients, helping them navigate the medical system and ask their doctors what options might available to them, including palliative care.
Another thing individuals can do, Cochran said, is to talk openly with their loved ones about death long before dying ever begins. That includes contemplating things like organ donation, specifying burial or cremation preferences, and looking into funeral options, including a post-death vigil or home wake.
“We need to accept that we’re not going to live forever,” Cochran said. “We’re going to die. We just don’t know when, and we don’t know how. Empowerment comes in planning for it and letting your family know what you want.”
Cochran and others acknowledged that it isn’t always easy to talk about death. Even with the emergence of YouTube channels focusing on death and “death cafes” where people are invited to contemplate their mortality, the taboo remains.
But Glatter says there’s another way to look at it.
“I see death as an opportunity for change and growth,” Glatter told HuffPost. “You see awakenings, forgiveness; you see new bonds made and old wounds healed, which I believe send the dying on their final transition peacefully and bring new opportunities for the people who remain.”
Buddhist teachers often instruct their students to meditate on death as a means to comprehend and make peace with the concept of impermanence.
“I find in meditation that the deeper you go, the more you see how much deeper there is to go,” said Mike McGowan, a death doula volunteer and board member of The Doula Program. “You get to a certain level and realize there’s so much more.”

Being a death doula, he said, is kind of like that. “You think you’ve figured death out and then realize there’s so much more.”