An opinion piece by Alexandra Robbins 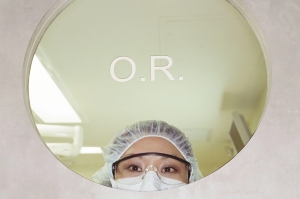 The laughter of the ER staff echoed down the hall as Lauren, a nurse in Texas, talked about a patient who had ingested “a thousand ears of corn,” requiring her to repeatedly unclog kernels from the oral-suction tubing. The episode had earned Lauren surprise gifts of corn nuggets from a respiratory therapist and a can of corn from an EMS technician. But not everyone found the story so funny. When Lauren entered a patient’s room nearby, the patient said to her: “I hope you’re not that insensitive when you’re telling your friends about me later.”

Although patients typically don’t overhear it, a surprising amount of backstage joking goes on in hospitals — and the humor can be dark. Doctors and nurses may refer to dying patients as “circling the drain,” “heading to the ECU” (the eternal care unit) or “approaching room temperature.” Some staff members call the geriatric ward “the departure lounge.” Gunshot wound? “Acute lead poisoning.” Patient death? “Celestial transfer.”

“Laypeople would think I’m the most awful human being in the world if they could hear my mouth during a Code Blue,” Lauren told me when I was reporting my new book on nursing. (I agreed to use only her first name, so she could speak freely about behind-the-scenes hospital life.)

Indeed, while people may readily excuse gallows humor among, say, soldiers at war, they may have a lower tolerance for it among health-care professionals. “Derogatory and cynical humour as displayed by medical personnel are forms of verbal abuse, disrespect and the dehumanisation of their patients and themselves,” Johns Hopkins University professor emeritus Ronald Berk contended in the journal Medical Education. “Those individuals who are the most vulnerable and powerless in the clinical environment … have become the targets of the abuse.”

I strongly disagree. The primary objections to gallows and derogatory humor in hospitals are that it indicates a lack of caring, represents an abuse of power and trust, and may compromise medical care. But in my reporting, I found that nurses who use this humor care deeply about their patients and aren’t interested in abusing their power. Their humor serves to rejuvenate them and bond them to their teams, while helping to produce high-quality work. In other words, the benefits to the staff — and to the patients they heal — outweigh occasional wounded feelings.

Nursing, while noble and rewarding, can be a physically and emotionally exhausting career. Many nurses are overloaded with more patients than the safe maximum. They’re on their feet constantly, moving heavy equipment or lifting patients — in an eight-hour shift, a nurse lifts an average of 1.8 tons. Nurses routinely observe tragedies and traumas, and perform futile care on critically ill patients. Yet through it all, they must demonstrate mental composure, physical stamina and alert intelligence, even if they are berated by patients and visitors, bullied by doctors or shaken by their cases.

Doctors and other hospital personnel are also exposed to death and suffering, but nurses may be more susceptible to the lasting emotional impact. Nurses spend the most time with patients individually and have a hand in every level of their care. A Maryland hematology nurse told me: “If they die, it’s very hard; you have lost someone you became close to very quickly, someone you were cheering to beat the odds. As a nurse, you can’t dwell on your loss. You have other patients who need you. One might think that you would build a tough exterior that doesn’t let the hurt in, but to be truly effective, you can’t.”

One of the nurses I followed for a year lamented that there’s no downtime or debriefing after traumas. “People die on our shift — sometimes several people in one day — and then we just go back to work,” she said.

It’s no wonder that nurses have relatively high rates of depression and anxiety related to job stress. An Emory University study found that intensive care unit nurses experience post-traumatic stress disorder at a rate similar to that among female Vietnam veterans.

While gallows humor may seem crass amid patients who are coping with illness or injury, many nurses depend on it so they aren’t overwhelmed by sadness. A Texas nurse practitioner explained: “Sometimes when something happens that is so awful you want to cry, instead you use black humor to keep from crying.” A Mid-Atlantic nurse told me that while attending to a massive-trauma case, she likes to “take note of the cheery toenail polish color of a patient, or remark that they picked a great day to wear clean underwear for the car accident.” In California, an ICU nurse persuaded a patient with a fake leg to help her prank a new doctor; the nurse pretended the leg was real and shouted that she couldn’t find a pulse.

The nurses I interviewed maintained that situations and symptoms, more often than patients, are the targets of jokes. I learned that some units have a dedicated “butt box” for items retrieved from patients’ rectums — glass perfume bottles, an entire apple, etc. — though after Indiana nurses pulled out a G.I. Joe, the real unfortunate hero assumed pride of place in the nurses’ station.

Researchers at Northeast Ohio Medical University say the patients most likely to be joked about are the ones perceived to have brought on their own medical problems. The California nurse told me: “We all play a game called Interesting Things I Have Found in Obese People’s Rolls of Fat. So far I’m sitting in third with a fork, second place is an ICU nurse who found a TV remote, and the winner is an ER nurse who found a tuna fish sandwich.”

But even when patients do become subjects of derogatory humor, we shouldn’t rush to criticize medical professionals for using it. Bioethicist Katie Watson suggests that kind of humor may result when health-care providers feel powerless to heal. “Derisive joking does the unspoken work of reframing physicians as blameless for their inability to help,” she wrote in 2011 in the Hastings Center Report.

Or it may be about doctors and nurses trying to distance themselves enough to be able to help patients to the best of their abilities. Better that patients are mocked and healed than, well, about to take a dirt nap.

Humor has been shown to decrease health-care workers’ anxiety, create a sense of control and boost spirits in difficult moments. This is important because they must get through traumas intact so they can be fresh and focused for the next patient and the next.

Humor also strengthens the connections between members of a medical team. As Lauren, the nurse who encountered the corn, put it: “It’s a byproduct of being placed in situations where death is common and unimaginable horrors are just another day at work. Gallows humor helps to deal with some of the horrible things we see in a way that bonds us together as a team against the bad stuff.” It lets them express their feelings more easily and say things that otherwise could be difficult to say — which leads to better patient outcomes.

That’s not to excuse all humor by health-care professionals. For example, mocking disabilities and using racial, ethnic or other cruel epithets go too far.

Consider the case of a Virginia colonoscopy patient who says he set his cellphone to record post-procedure instructions and ended up recording his doctors making fun of him while he was under anesthesia. The patient claims that his doctors called him a “retard” and joked that he might have syphilis or “tuberculosis in the penis.” He is suing for defamation and seeking more than $1 million in damages.

“Tuberculosis in the penis” is funny because it makes no sense. But “retard” is an unacceptable word under any circumstances. If the patient’s claims are true, his doctors crossed a line.

Of course, it’s an odd case, because the humor was supposed to be private. Doctors and nurses usually make every effort to ensure that backstage humor stays backstage. But even if occasionally an unintended witness misinterprets the joking as insensitivity, the misjudgment is worth the trade-off. Ultimately, laughter is a useful medicine.

Humor has a place in hospitals, even if it’s dark, even if it’s derogatory — as long as it isn’t cruel. We ask extraordinary things of our nurses and expect them to face horrors and grotesqueries that we cannot. They should be permitted to resort to whatever non-destructive coping measures they need in order to provide the best possible care, even if those methods might seem unprofessional outside of the health-care setting. Humor is a way for nurses to empower themselves and to unite with one another, determined and defiant, against disease and injury. Above all, it is a way for nurses, who are overworked and underappreciated, to locate hope amid hardship — which is exactly what we need them to do.

Alexandra Robbins is the author of “The Nurses: A Year of Secrets, Drama, and Miracles with the Heroes of the Hospital,” released this week.