Paris (CNN) – Facebook has prevented a French man with an incurable illness from streaming his own death on the social media site, according to a company statement. Alain Cocq, 57, from Dijon in eastern France, has a rare incurable medical condition that causes his arteries to stick together.He estimates he will only have days to live after stopping all medication, food and drink, which he planned to do on Friday evening. Cocq had intended to broadcast his dying days on the platform, to raise awareness about France’s laws on assisted dying.

In a statement Saturday Facebook said the live stream was prevented to avoid promoting self-harm.”Our hearts go out to Alain Cocq for what he’s going through in this sad situation and everyone who is personally affected by it,” the company said in the statement.”While we respect Alain’s decision to draw attention to this important issue, we are preventing live broadcasts on his account based on the advice of experts that the depiction of suicide attempts could be triggering and promote more self-harm.”Cocq previously lobbied President Emmanuel Macron to allow him to die by “active medical assistance” but was unsuccessful.

Euthanasia is illegal in France. French law also dictates that deep and continuous sedation, which can hasten a person’s death and render them unconscious until they die, is not legal unless under specific circumstances set out by the 2016 Claeys-Leonetti Law, which also requires a person’s death to be imminent. But French citizens do have the right to stop medical care, and under French law there is no prosecution for suicide. 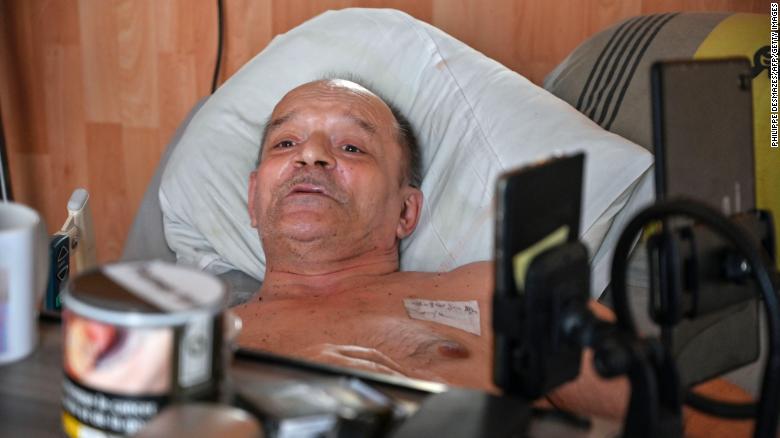 Alain Cocq said he planned to stop all medication, food and drink on Friday evening.

Cocq, who is confined to a wheelchair and founded an organization to improve the lives of disabled people, wrote a letter to Macron dated July 20 asking the President to allow him to die “with dignity,” describing his “extremely violent suffering.”

“I would like to make it clear to you that on this day I find myself in a situation of having on sound mind, confined in a dysfunctional body, crippled by suffering,” he wrote in the letter, which has been seen by CNN.

Cocq urged Macron to review French laws that prevent health care professionals from hastening the deaths of their dying patients with medicine.

“I simply ask to leave with dignity, with active medical assistance, because my dysfunctional body prevents me from doing so surrounded by my family and my friends,” he wrote.

“Some use the term ‘active euthanasia’ or ‘assisted suicide,’ but for me the term most suitable is ‘end of life with dignity with active medical assistance,'” he wrote.

Writing in response, President Macron said he was “moved” by Cocq’s letter and admired the “remarkable willpower” he had shown in fighting “incessant battles” with the illness.

However, he said he could not comply with the request because he is “not situated above the law” and could not ask someone “to overstep our present legal framework.” 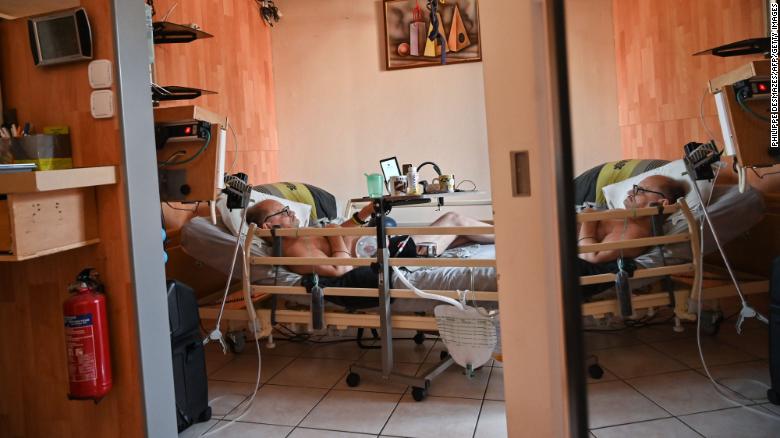 Cocq says he is asking to simply die with dignity.

In an interview with CNN on Friday, Cocq said that he expected Macron would not be able to comply with his request but that he appreciated the “compassion” he had shown him in his letter.

“Today, I am full of plenitude. I took the decision to end my life on June 26, which is when I asked my medical assistant to type the letter I later sent to the President.”

“It was a brutal decision, but I can tell you I haven’t felt that good in a long time,” he told CNN.

“I know I am about to endure pain like I’ve never endured before, for about five to seven days,” he said.Of the attempt to live-stream his death via video he said on Friday: “I am not doing this for voyeurism. I want to inform people about something we all know but refuse to talk about. Pain.”

“I chose to show this pain,” he said.

“The basis of a democracy is that citizens have a free choice. Death should be democratic.”

Cocq also said that, as a Christian, he did not believe what he was doing was anti-religious.

“God is love, and God will not let his people suffer unnecessarily,” he said.

It’s unclear whether anyone assisting him would be prosecuted or whether authorities are planning to intervene. CNN has reached out to the Elysee and the health ministry for comment.

She told CNN she believed French people were “ready” for a debate about assisted dying.”

He started talking about it about two years ago. It took me time to understand it, to accept it. I am also ill, as I am myself suffering from multiple sclerosis,” she said.

“I cried yesterday, but Alain is the one who cheered me up. He is very serene in his initiative,” Medjeberg said.

Speaking to CNN, Philippe Lohéac, executive director of the French association for the right to die with dignity (ADMD), criticized France’s assisting dying laws, claiming they do not “take into consideration sick people whose life has become a nightmare, whose life has become nothing but survival.”

He said the law needed to be changed so people could choose how they died.

Eva Tapiero and Niamh Kennedy contributed to this report.