Why does the UT Veterinary Medical Center offer a pet loss support group?
(Click below to find out)
https://www.knoxnews.com/videos/life/2018/04/11/why-does-ut-veterinary-medical-center-offer-pet-loss-support-group/503010002/

Burke was home with Hippie Chick the morning the plump orange tabby died. They’d been best friends since she adopted this older cat seven years earlier. Nicknamed “H.C.,” the cat was the first pet Burke owned as an adult.

“She had such personality and sass. I wish I had had her all her life,” she said.

“You tell yourself, this is going to happen. But when it happens, it’s just final. I would say losing her was just like losing a person. The feeling was the same. To say I don’t grieve for her still would be wrong,” Burke said.

Grief is grief – whether it’s pain over losing a beloved animal or beloved human, said Sarina Manifold, a licensed clinical social worker and certified grief recovery specialist. Pet owners are often surprised at how deeply sad they are when a pet dies.

Manifold reassures them, “You aren’t going crazy. You are allowed to feel this way.”

Often people confide, with mixed grief and guilt, that their animal’s death hit them harder than that of a parent, spouse or grandparent. They see their pet as a dependent family member that gave them unconditional love.

“The head says this was a dog, cat, horse, bird, goat, pig. But in our heart this is our kid, family member, best friend,” said Manifold, who counsels owners and leads the University of Tennessee College of Veterinary Medicine pet loss support group. (Information about UT veterinary grief services is at http://vetsocialwork.utk.edu/grief-and-bereavement).

Some 85 million families – 68 percent of United States households – own a companion animal, according to a 2017-18 American Pet Products Association survey. Sixty million families own dogs; 47 million live with cats. The number’s up from the group’s first 1988 survey, when 56 percent of U.S. homes owned a pet. 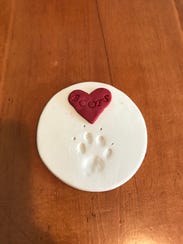 Memorializing a dead pet can take many forms. Often owners will make or receive from their veterinarians a cast of the animal’s paw print as seen here. (Photo: Amy McRary/News Sentinel)

While more people own pets, grieving an animal’s death isn’t always understood or supported. Manifold calls it “disenfranchised grief.” Owners may feel guilty about being sad; people around them may not understand their sorrow or will discount its depth.

“People don’t necessarily mean harm when they say things like ‘you can have another one’ or ‘It’s just a dog, just a horse, just a fish,’” Manifold said. “But to the pet owner, that’s their baby or a member of the family. Each relationship is unique and that animal’s not replaceable.”

A person may grieve differently for different pets. Sometimes it’s comforting knowing a pet lived a long life. An animal’s unexpected death may add guilt and hurt more. Owners can struggle over whether – or when – to euthanize an ailing pet.

His name was Jackson

“If anything, it has gotten harder. You know you are relieving the pet of its suffering but you’re thinking about that family’s loss and their experience of having that loss,” she said. 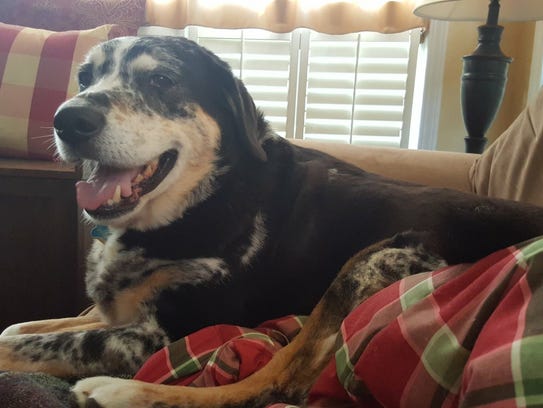 Jackson was 10 years old when chronic kidney failure made him so ill that he needed to be euthanized. (Photo: Leigh Whitmire)

Since January Whitmire has been coping with her own grief over her dog Jackson’s death. Caring for other animals at work helps. She also shares her story, hoping to help other pet owners know “their feelings are valid and real and normal.”

Jackson was a Catahoula mix. He lived with Whitmire and her husband, Jamie Whitmire, for a decade she said “flew by.” He’d been a rescue. To her, the 55-pound pup was “a once-in-a-lifetime dog.”

Diagnosed with chronic kidney failure in April 2016, Jackson coped well until fall 2017. UT veterinarians put a feeding tube in his neck; he needed lots of home care. By January, he was faltering, and the Whitmires knew it was time to say goodbye. A veterinary colleague came to their home to euthanize Jackson. It was a Saturday; Jamie and Leigh Whitmire read their 10-year-old dog “love letters” they’d written.

Whitmire initially was skeptical when she read about the letter writing idea. But reading her feelings aloud as Jackson rested on his bed one last time proved “extremely therapeutic and provided a lot of closure,” she said.

Reading books on pet loss also helped. Among the books Whitmire recommends are “Coping with Sorrow on the Loss of Your Pet” by Moira Anderson Allen and “Pet Loss Companion: Healing Advice from Family Therapists Who Lead Pet Loss Groups” by Ken Dolan-Del Vecchio and Nancy Saxton-Lopez. She also found solace at the UT pet grief support group.

A tsunami of sorrow

Jackson wasn’t Whitmire’s first pet to die. She grieved the deaths of her two cats years before. But somehow his death hit harder.

“I think maybe because Jackson and I had this amazing bond. He was always by my side,” she said.

Months later grief can unexpectedly hit Whitmire. But that roller coaster’s normal and can be triggered by memory, Manifold said. Triggers can be simple — seeing a cat that looks like a deceased pet, passing a dog’s favorite park or spotting a pet’s favorite toy.

Mister looked as fierce as he was gentle and was as smart as he was goofy.

Rodney and Erin Chapin’s red Doberman with unclipped ears and soulful eyes was an 80-pound lap dog. His favorite lap was Rodney’s. Dog and man “were thick as thieves,” said Erin Chapin. .

By then, he was getting sicker and weaker.

“It was a free fall,” Erin Chapin said.

She coaxed him to eat soft food and chicken and rice. “I was actually putting food in his mouth. He wanted to eat but he couldn’t. He was shutting down.”

She slept in the living room with him. “You’d hear him and he’s in pain. You get up and say, ‘What can I do for you? Do you need something to drink? Let me get that food again and we’ll try it. Do you think you can go outside?’ You try anything.”

On Oct. 9 Emily and her brother Michael said goodbye to their dog. Rodney and Erin drove Mister one last time to Dr. Wesley Keele.

“We said goodbye to him and the vet came in and he said goodbye and told him what a good dog he had been,” Erin Chapin recalled. Keele euthanized Mister as the couple petted the dog. “I was looking in his eyes and you just saw him go,” she said.

A gnawed blanket and a smile

After a couple of days they put up Mister’s bed.

“I just felt it was a little morbid, a little weird to keep it out,” she said.

Their other Doberman, Roxy, acted differently for about a week. Now, she’ll rest on blankets Mister gnawed holes in.

“I think of him every time I see those holes and I just smile,” Erin Chapin said.

A collar, a necklace and memories

A second collar hangs on a hook by the Chapins’ back door. The door has bite marks from where Mister tried to open it. A tin holding his ashes sits on a table near the fireplace. Emily’s drawing of her happy dog on that first, fateful vet trip stands next to the tin.

Jennifer Burke placed the wooden box of Hippie Chick’s ashes in a curio cabinet, resting the cat’s collar tag atop the box. She displays figurines that remind her of Hippie and photos of her friend. “I never plan to remove them.”

Whitmire also created a small memorial to Jackson. His photo, favorite stuffed lamb toy and a bandanna he wore are arranged near the container of his ashes.

“That has really helped me a lot,” she said. “But I know for some people it’s just too hard to have that memorial. They can’t bear have that.”

Whitmire and Burke wear jewelry memorializing their pets. The beads of Whitmire’s necklace spell Jackson in Morse code. Burke’s bracelet is set with a cast of Hippie’s right back paw.

Some owners remember pets with memorial services. Often they share memories and photos on social media, inviting condolences. Some donate money or items to a rescue or shelter in their pet’s memory. Planting a tree or a garden around a pet’s grave are other ways to remember, said Lap of Love Veterinary Hospice veterinarian Dr. Allie Prokop.

“I think there’s something to be said for having a memorial ritual, and it doesn’t matter what that is,” Manifold said. “There’s a reason we do this — to help our brains and our hearts to go, ‘OK, this is how it was and this is how it is now.’“

Often before they find a spot for one pet’s ashes, people are asked if they’ll get another. For some the answer may always be no. Others, “after their hearts heal, open up to another animal,” Prokop said.

Roxy’s likely to remain the Chapins’ only dog; they recently adopted an orange cat named Moses. The Whitmires already owned their dog, Charlie; Leigh Whitmire believes they’ll add another pet at some point.

Burke hesitated to get another cat. Then in January she adopted two young felines from Happy Paws Kitten Rescue. Frannie and Archie helped heal her heart. They don’t replace Hippie Chick.

“You don’t replace a pet; you never do that,” she said. “But you learn there are so many other animals that need love and affection. Why deny them that love you have because you are selfish and you wish you had your pet back? It’s that kind of circle. And one day you wake up and you’re not as sad… But it takes time.”