A moment that changed me: the third time I was told my mother was dying 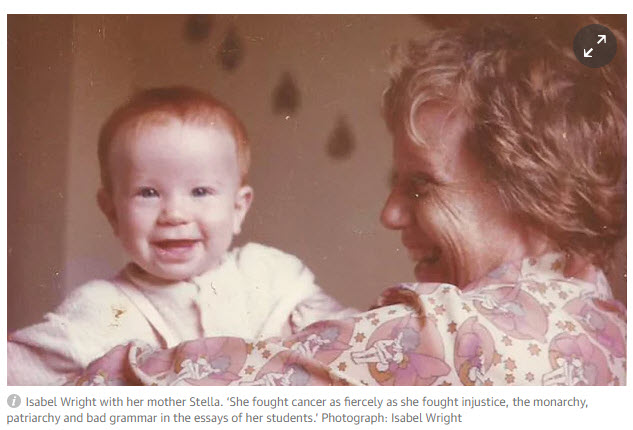 The very idea seemed inconceivable. And the first two times, using nothing more than good behaviour and magical thinking, we stopped it.

I had recently started primary school when I was told my mother was going to die. Prepare for the worst, someone said. Hardly anyone knew at school. A friend was baffled when I was given an unexplained hug by a teacher. It seemed inconceivable that my funny, feisty, feminist mother could die, that a sinkhole could open under my life like that.

I decided there must be some prayer, magic spell or extremely good behaviour that would hold off the dark. And then, through the wonder of modern cancer treatment, the brilliant NHS and a good measure of sheer bloody-mindedness, hold off the dark she did.

I was in my early teens when they told me the cancer had returned and that she was going to die. It seemed even more inconceivable that this would happen then. I was a weird, ginger-haired geek about to battle through adolescence – there was no way I was going to let her go. Surely a little more magic and extremely good behaviour would get us through?

Once again, against the odds, my mother and the wonder of modern cancer treatment triumphed. My mother was fierce, all right. I decided her superpower was fending off death. She fought cancer as fiercely as she fought injustice, the monarchy, patriarchy and bad grammar in the essays of her students. She thought my sister and I were fabulous and was always on our side of the ring, urging us on.

I started to write plays and thought I could weave more magic, creating universes where I could decide who triumphed and who succumbed. I wrote a play about a young man who desperately tries to tell his funny, feisty, dying father that he loves him. My mother thought it was hilarious, especially the joke about lung cancer.

Through my early 20s she was often in remission, although no one ever said this. It felt like the shadow over our lives had lifted, but it was still there. I feel privileged that she met my future husband and approved of him. Our relationship evolved into a more equal one, though she was always going to be the matriarch of my small, close-knit, female family circle.

Just after her granddaughter was born, my mother faced her final battle. That was the third time I was told she was dying, but even sitting through countless meetings with her oncologist I never really believed it. She had a superpower, after all. We were all on our very best behaviour. My sister had a baby on the way who wanted to meet her. Surely modern medicine owed us another win. She’d been so very good at trying whatever new anti-cancer drug was invented.

Even as she moved into a hospice I told myself it was temporary. One day she asked a nurse to help her get dressed in the mother-of-the-bride outfit she’d bought for my wedding, which she now knew she might not attend. Even as the nurse took photos, I didn’t truly believe she wouldn’t be there making the most kick-ass mother-of-the-bride speech ever.

I smiled ferociously through the photo shoot and told myself she was just being over-prepared. I tried to tell her I loved her, over and over, but mostly we just made black jokes. Surely this was just the bit when the audience thinks all is lost but then somehow, miraculously …

A friend recently lost a parent, and I clumsily tried to explain why I knew all about the secret club she’d joined, why it gets less raw but still remains shitty. Rona Munro wrote an amazing play about grief and mountaineers, and there’s a line where the character says she’s been very good, and everyone’s saying she’s done so well and … when does she get her reward?

But there isn’t a reward for grieving well, because the person’s still gone. Finding yourself an orphan when you’re in your 20s shouldn’t feel such a big deal; there are always people who have gone through worse, yet the sense of being on your own is profound. When I have a day that socks me in the jaw I still turn and expect to have her at my back.

I hear her voice when Donald Trump talks about grabbing pussy, when politicians let down poor people, when poetry makes me cry, when new films explode on to the screen, when the Queen’s estate gets caught up in a tax scandal. I wish I could hear what she thought about these things. And I know it would give her a kick to be in the Guardian.

• Isabel Wright is a playwright

Caring for a parent, Death and Dying, Talking about dying

One thought on “A moment that changed me: the third time I was told my mother was dying”