In the middle of the showroom at Trey Ganem Designs is a small casket on a rolling cart. It’s not yet fully assembled, but it is painted a dazzling, sparkling pink.

The casket is for a little girl – one of the 26 lives lost in Sunday’s massacre at the First Baptist Church in Sutherland Springs, Texas.

“Her dad just said, ‘That’s my princess,’ ” Trey Ganem says, so Ganem is building her a princess casket to be laid to rest.

The audio version of this story can be heard below:

Ganem, who creates customized caskets in a tiny Texas town about two hours away from Sutherland Springs, has offered to build caskets for the victims of the shooting, free of charge to their families.

“This is something we want to take off their hands,” he says. “And hopefully it will be something for them to celebrate about.”

When most people see caskets, they see death, Ganem says. “Our caskets, you see the life of the person that’s in it.” 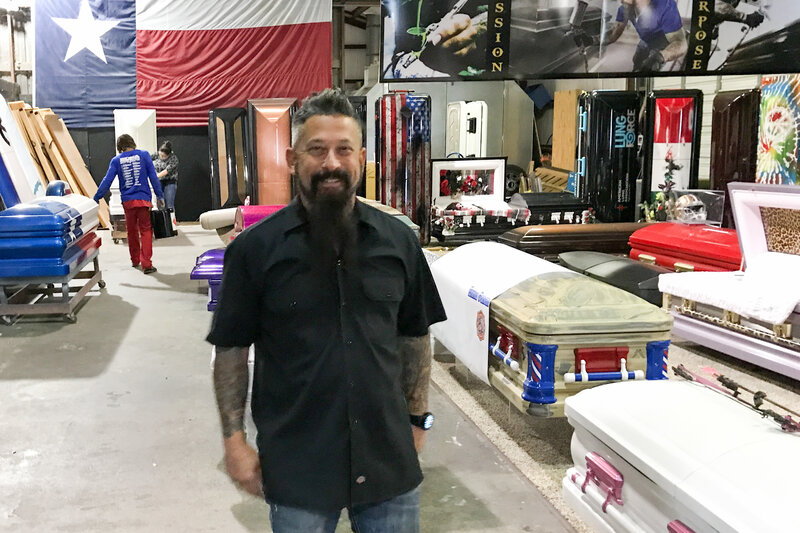 Trey Ganem builds customized caskets designed to represent and celebrate a person’s life. “When you look at our caskets, you see the story of the person that’s in it,” he says.

His shop and showroom in Edna, Texas, is filled with incredibly detailed coffins — there’s one painted like the Texas state flag; another like a Louis Vuitton bag; and another still, shaped and painted like a bright red ’57 Chevy, complete with working headlights.

To build a customized coffin, you have to know the person who will be in it, Ganem says.

For the past few days, Ganem and his assistant Tiffany Sublett have been talking to funeral home directors and families of the deceased. They take down notes — double-checking the spelling of the victims’ names; asking about favorite colors, movies and pets.

“Does she have a favorite character on My Little Pony that’s her favorite, do you know?” Sublett asks the funeral home director for Sutherland Springs during a phone call.

The notes she writes are heartbreaking.

“I have a 2-year-old son and I’m pregnant,” Sublett says. “So, I mean, it’s all sad. It’s tragic. The amount of small children that are gone and the stories, just hearing and talking to the families. It’s definitely emotional.”

And chronicling those lives is especially difficult when it hits so close to home.

There are about two degrees of separation here in South Texas, so Ganem knows some people who live in Sutherland Springs and went to the church.

“I had just got finished from helping some of the Las Vegas victims and, you know, I just left that,” he says. “And to come back here and think this is Texas, a small town, to hear [about the attack] was just unreal.”

Ganem has since spent some time at a hospital with family, who were waiting and praying for other family members who were injured. Sublett has been working the phones.

For Maggie Rivera, the reality of what had happened didn’t fully hit her until she walked into Ganem’s shop. She and her husband, Michael, drove down here from San Antonio to volunteer their time and help. 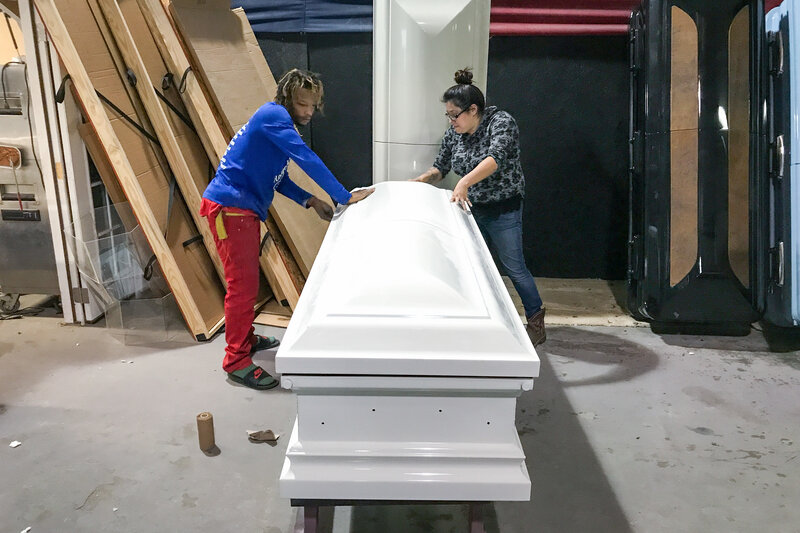 Kenneth Burnett and Maggie Rivera sand a casket, readying it for a pink camouflage paint job at the shop in Edna, Texas. The woman it is for loved to hunt.

“The first casket they gave us was a little 4-by-6 one, and in the corner over there, there’s the little toy from Cars — Mater — and Mickey Mouse and that’s my son’s favorite,” she says. “I just had to take a moment to sit back.”

One of the victims was 17 months old. The Riveras have an 18-month-old son at home.

“It really puts things in perspective,” she says, sanding a casket to prepare it for painting.

In the back of the shop, Michael Rivera walks out of a heated room where he has been painting casket handles. He has blue paint staining the palms of his hands. Nearly the rest of his body is covered in tattoos.

“I’d never painted a coffin before in my life,” he says, pouring metallic-silver paint into a spray gun. 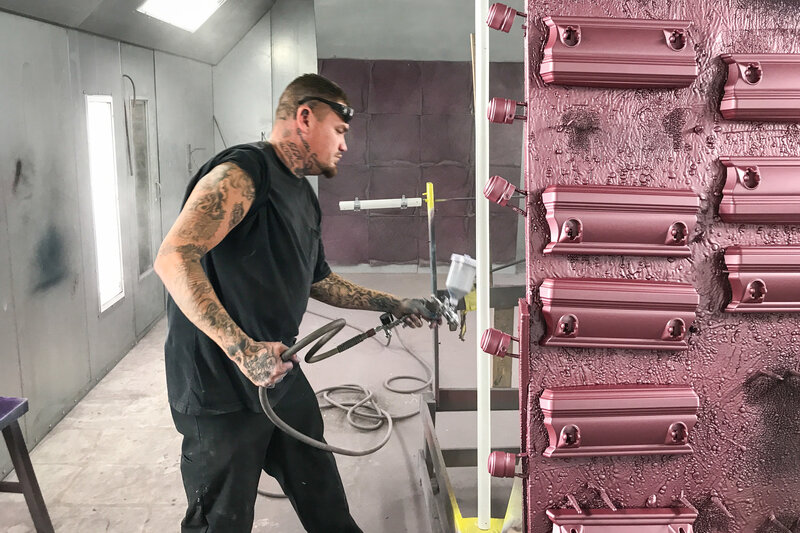 Michael Rivera, who normally paints cars for a living, is volunteering in the shop to help paint the caskets and their parts.

But he and his wife decided to volunteer as soon as they heard that Ganem was offering the families free caskets. Michael grew up in Sutherland Springs and he, like his wife, is shaken by the shooting.

He gestures to the shiny pink casket on the showroom floor.

“I know that’s for a 6-year-old little girl. And that’s hard to even imagine,” he says. “For lack of better words, it just sucks. It’s for a little kid at the beginning of their life.”

Rivera, like everyone at the shop, is hopeful that their efforts will help the families of the victims begin the long process of healing. In the meantime, working and doing something positive, he says, is helping them.