Answering your questions about hospice care. 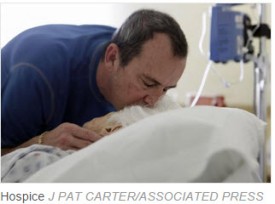 Hospice care, which focuses on the comfort of terminally ill patients, in the United States is growing. 1.65 million people used hospice care in 2011, a 16% growth since 2007, according to the National Hospice and Palliative Care Organization.

There are still some barriers to Hospice care, according to a study in Health Affairs.

The survey of nearly 600 hospices nationwide found that 78 percent had enrollment policies that might restrict patient access to care, especially for those with high-cost medical needs. The policies included prohibitions on enrolling patients who are receiving palliative radiation or blood transfusions or who are being fed intravenously.

Medicare pays the majority of hospice bills, and officials have raised concerns in recent years about possible misuse of federal funds. Eighty-three percent of hospice patients are 65 or older, according to the National Hospice and Palliative Care Organization.

The article goes on to say, however, that every hospice is different and larger hospices (those that have over 100 patients) are more likely to be able to take on more expensive patients.

Susan M. Wolf, professor of law and medicine at the University of Minnesota, andGloria Cade, director of hospice and palliative care for Allina Health, join The Daily Circuit Monday, Jan. 28 to address common misconceptions and misunderstandings about hospice care and answer your questions.